OK not so much a scary game in and of itself...but it's worth noting that there's an urban legend surrounding this game that most Sonic fans know quite a bit about.
Originally made for the Sega Saturn, Sonic R was probably the only Sonic game that was considered exclusive to the console, and even then it wasn't really a typical Sonic game as most people know the games by. It was a racing game with the characters from the Sonic the Hedgehog franchise. One thing I can say is that it's got blocky choppy graphics and you tend to slam into invisable walls...but this was back when 3D games first became a thing, so the transition from 2D to 3D was a little awkward and the handling was something to be desired. But once you get used to the controls, it can actually be a fun game. I like that you aren't restricted to a car and that you can actually play Sonic running in all his speedy glory. Granted, I love Sonic and Sega All Stars racing, and I always liked Sonic Drift II for the game gear, but this game is fun and original in it's concept. I just wish that they would have given Sonic his ability to run in the racing games, but maybe they gave him a car to level the playing field in All Stars. One can only speculate.
In addition to the main cast, there are a few unlock-able characters.
Among those...is the infamous Tails Doll. Tails Doll is what the game's legend centers around. Supposedly there are tales of the Tails doll coming out of the game to do horrific things like stealing people's souls and killing people. The legends describe him as "not really metalic and not really flesh, not really alive yet it exists..." . I have to admit, there's a lot of imaginative creativity within the fandom to create a story like that to a character that has essentially only officially appeared in one game, and an infamous one at that. I think the legend might have been made to give the game a little more flare. Obviously the legend is easily debunked, as I've played and beat the game several times as a child and not once had any problem. The only problem I have with the game now is the lousy controls, either from the fact that it's just an old game and the controllers are worn out, or I'm not used to the way the game handles anymore since it's been a long time since I played it. But for fun and nostalgia's sake, I decided to give it a go. Funny part is I didn't even know about the legend until many years later, and then I thought it was silly. But it's kind of grown on me and now I just like having fun with it. Here's my interpretation of the Tails doll: Here's what it actually looks like as pictured at the end of the game: 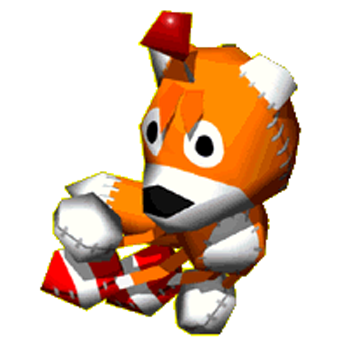 I don't think my kids ever had this game, but it is interesting to know that urban legends have developed around video games, too.
Top

It is interesting. I've come to find out it's not just Sonic R that spooky stories about Sonic are shared, but in some of the other games as well. I think some are blatantly made up, others are presented in a more serious light. In fact, it's not just Sonic that people have spooky stories to share about: A lot of popular video games do.
They refer to them as "Creepy Pastas." Tales of horror surrounding a normal, seemingly innocent game.
One story refers to Sonic 2, where the introduction of Tails came to be known. (Not that Tails Doll, but Tails himself who is Sonic's side kick, and has been Sonic's best friend and partner since the glorious days of the 90's and the Sega Genesis lol). It's a little running joke that Tails can't die, because in Sonic 2, he follows Sonic around, repeats his every move, which often ends up winding him up in dangerous situations where he gets attacked by a robot. But he always comes back every single time. A tale tells of a gamer who played around with this, and tortured poor Tails on purpose. But then, Tails is said to come to life and get his revenge on the gamers. I suppose the moral of the story is, be kind to your NPC gaming companions; they might come back to haunt you! lol.
Another popular Creepypasta is one about Herobrine in Minecraft. I don't know that much about him, I think he might have been a deleted/corrupted file, but some fanfiction implied that he inflicts horror upon unsuspecting gamers in the game. Minecraft is already kind of spooky in a way anyway. You wouldn't think it at first, but when you're lost and confused, not knowing what to do, and then find yourself attacked by strange monsters, including creepers, zombies, and skeletons, and are even capable of building a portal to hell or some weird dimension that looks like hell, I'd say that alone creates potential fanfiction ideas.
I don't think Creepypastas are limited to video games either. I think they can be linked to just about any fandom like movies and TV shows. In fact, I think people have been able to write original stories as well. They're basically spooky short stories, but they are very common in video game stories.
Someone also made a really creepy game based on Sonic (and this is a fan work mind you

) called Sonic.exe. It basically takes Sonic the Hedgehog, and turns it into a horror game. There's also a version that looks like the old school Sonic game, until you start playing it.
Nocturnal Purr-Fection
Top

I've heard of "Creepy Pastas," though I am pretty much uninitiated in this area.
Top
Post Reply
4 posts • Page 1 of 1