SummerForums.com is a great place to discuss Everything Summer!
Post Reply
28 posts

Yeah... I know it's not quite summer yet, though it feels like it here. After a really hard day's work, all I wanted to do was get home and drink a brew. Get's me to a wondering... what is your drink of choice? On a really hot summer day?

I can't think of anything better than an ice-cold beer, though a Sonic Blast comes a close second. Fortunately, I live in one of the beer capitals of the world. Good thing, because we don't have much else going for us. <--- that's sarcasm.

I stopped today and picked up a couple growlers of my favorite beers. I'm thinking life don't get no better than this.... ....could be the beer talkin'. Scaring some little kid on Halloween... that's ecstasy.

Edit: In the background of that picture you can see a box of 'Leinenkugel's Summer Shandy'... try it, very yummyful. Should be available nationwide?

When it comes to beer, my favorite is Dos Perros by Yazoo--but that's a local drink, may not be available everywhere. Dos Perros tastes like chocolate.

When I think summertime drinks, I generally think lemonade. Lemonade with mint, or maybe raspberry lemonade. Being from the deep South, I am supposed to love sweet tea, but (shhh!) I don't like sugar in my tea.
Top

I'm not a big beer drinker, I like Margarita's or Mojito's!! 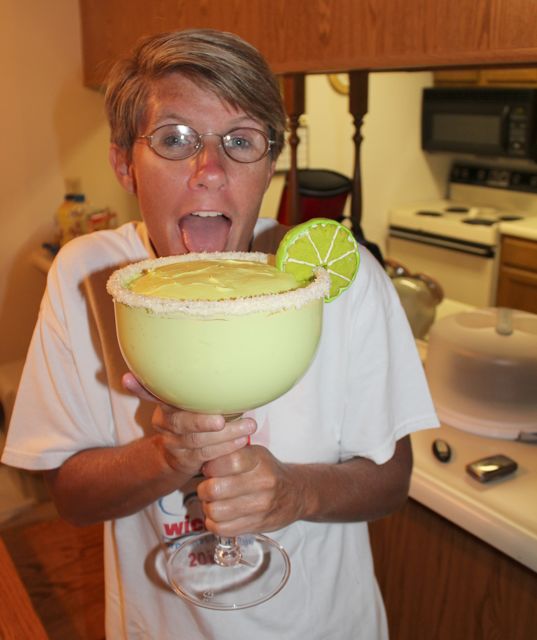 Hey now, that doesn't look like any Margarita I have ever had!!!

Drinking a Summer Shandy right now. I guess with Memorial Day gone and past it's time to wish you all a de facto Happy Summer! I ain't waiting till June 21st.
Top

Well shoot when I think of summer I think of Lemonade and Iced tea. Not a big alcohol drinker here. I have a glass of wine or a wine cooler every once in a while though but never been a big time partyer or anything like that. I don't even like the taste of beer, but to each their own!
Nocturnal Purr-Fection
Top

Believe it or not, for me there's nothing like a large mug of A & W root beer on a hot Summer day. That goes down quite well when I barbecue.

Ever try A&W's Cream Soda? I think it's the best Cream Soda ever made to be honest. I had to special order it at the store.
Nocturnal Purr-Fection
Top

No, I can't say I have. I'll have to try it some time, but now a days I can only tolerate diet soft drinks because of the dumping syndrome. A & W diet root beer is awesome, too. It tastes no different then the regular.

I don't know if I could stand it if I couldn't have sweet stuff. I really should cut down so I don't end up diabetic one day.
I don't like diet stuff myself, but I suppose I'd learn to get used to it, or just try to drink water.
They do however, make a diet variation of the drink. Just getting the regular kind is hard enough to find as it is though around here. It must just be more popular up north, just like you can only find Cheerwine soda down here. (Cheerwine isn't a wine, it's a Southern Beverage I've come to like, though prefer it in small quantities. I can find it at Walmart whenever I want to get some. I think the idea was to have a soda that resembled wine, much like root beer resembles beer, but isn't a beer it's a soda.)
Nocturnal Purr-Fection
Top

I use to feel the same way about diet soda but now a days I actualy prefer the diet. The regular tastes to syrupy and sweet, except in the case of A & W Root Beer. A & W diet or regular root beer tastes exactly the same to me. Pepsie, Mountain Dew, Coke, any of those drinks I only like the diet.

My husband says diet Dr. Pepper tastes the same as the regular. I have never been a fan of any type of soda and drink them very occasionally.

I'd have to say that when I think of summertime, I think of lemonade.
Top

I never cared for Dr. Pepper, diet or otherwise, but I do love a good mug of root beer on occasion. There use to be a place at Great America Amusement park that served up huge mugs of root beer in a frosted mug.

Looking forward to this summer. We now have a Sonic Drive-in in town so now I can have all the cherry limades I want, half price between 2 and 4 in the afternoon. This store is still on the other side of town so I'll only stop when already driving past but they are building a couple much closer which should be open by next summer.
Top
Post Reply
28 posts